Chopin Monuments Around the World I - Warsaw, Poland

What is the function of Chopin monuments? They do not tell us how he looked like. Maybe what he and his music meant and means...  national ideology, artistic conventions, musical myth-making...

For his looks we could turn to the only two extant photographs of Chopin, one from 1849, with the suffering, somber pianist facing straight at the camera (taken by L.A. Bisson at the home of Chopin's publisher Maurice Schlesinger) and another one, badly damaged, yet revealing the elegant, reserved, intelligent and vulnerable man in 1846 or 1847 (a daguerreotype from Warsaw's Chopin Museum, published in 1990 by John O'Shea, reprinted and reversed by pianist-composer Jack Gibbons). 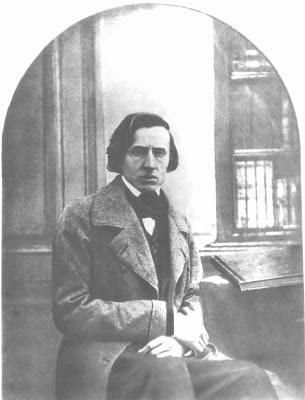 In both,  Chopin wears a tense expression, with a frown above a prominent nose. He is dressed elegantly; his hair is longish and combed back, falling somewhat over his forehead. ( A purported third photograph, of Chopin on his deathbed, surfaced in 2011 but is considered a 19th-century fake). 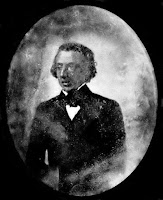 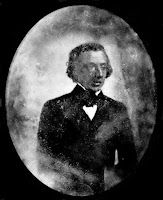 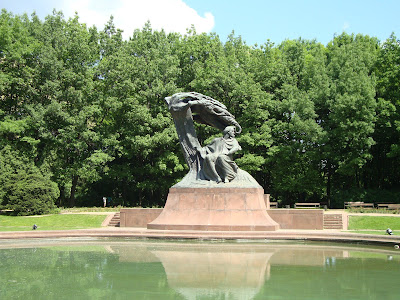 Wacław Szymanowski designed the world's most famous Chopin monument in 1907, at the height of Art Nouveau style. It took almost 20 years from the concept to implementation, and the monument went through several reincarnations prior to being built.  It was finally erected in 1926 in the upper part of Warsaw's Royal Baths (Łazienki) Park, visible from the Aleje Ujazdowskie boulevard, with a large reflective pond in front of the bronze statue of the composer seated by a willow bent by the force of wind... 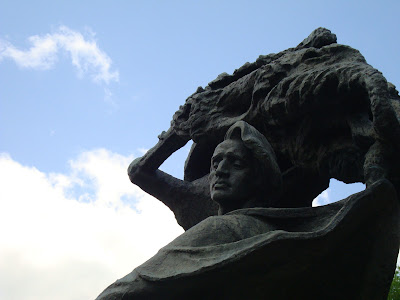 Every time I visit Warsaw I stop over at the monument, depicted here with lovely blues and greens of the spring.  I really do not like it. It must be some kind of a morbid fascination, then... But only now, after looking at the photographs, I noticed that it shows the suffering, inspired pianist in reverse, with the lock of hair above the frown flowing dramatically to the left, from hair parted on the right.  The historical accuracy has to give in to the artistic vision... For a detailed story of the concept and genesis of the monument read the article by Waldemar Okon, "The Monument of Fryderyk Chopin by Waclaw Szymanowski: Concepts and Reality" in The Age of Chopin, edited by Halina Goldberg, 2004. 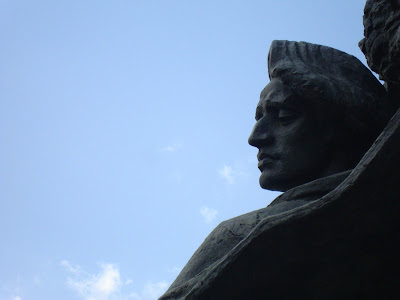 For those who do not know, the Monument that we see now is not the original bronze cast erected in 1926 - that one was destroyed by the Germans on May 31, 1940, as depicted on the photograph below. 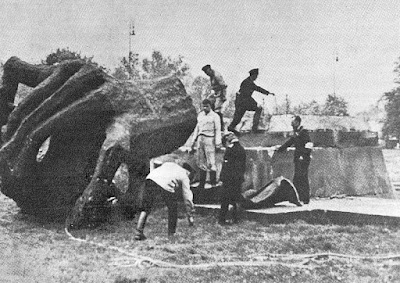 The rebuilt statue was dedicated in 1958, with an inscription on the side of the pedestal documenting this aspect of its history. Noon Chopin recitals are performed at the base of the statue every Sunday (in good weather) since 1959. You can listen to a brief fragment of Fantaisie - Impromptu from 2007 (amateur video), or to a longer 10-minute fragment of a recital by Piotr Latoszyński from 14 September 2014. 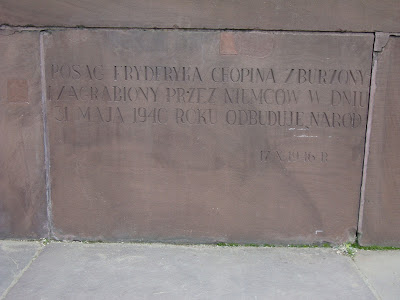 There are many other "faces" of Chopin in Warsaw, stylized from his hand-drawn or painted portraits, that appear on a variety of memorial tablets in Warsaw, the city of his youth and studies.  Some have been there for decades, others were created and placed on the occasion of his bicentennial in 2010. 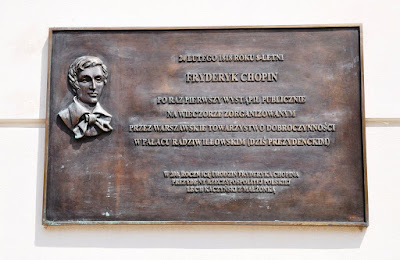 A plaque from 2010 commemorates the 8-year-old child prodigy in his first public performance that took place in today's Presidential Palace, Warsaw, The concert was organized by the Warsaw Philanthropic Society (Towarzystwo Dobroczynnosci) and took place on 24 February 1818. 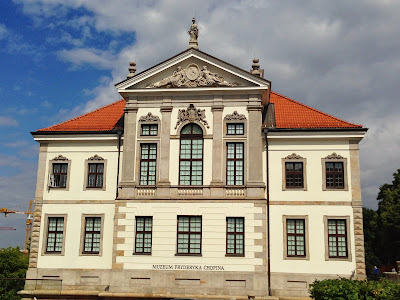 From there it is not too far to Palac Ostrogskich on Tamka Street (also rebuilt after the war), now the Chopin Museum, that houses many Chopin sculptures, portraits and documents, among them the first, and most realistic sculpture of the composer, his death mask, made in plaster by the husband of Solange, George Sand's daughter, Auguste Clesinger. 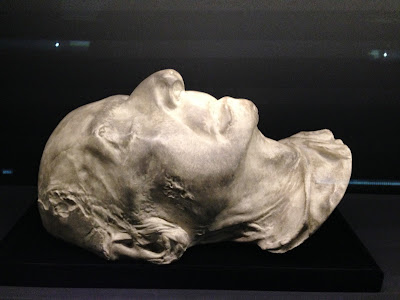 An altogether different image - youthful, happy  Chopin with a pompadour - appears on the bas-relief adorning the plaque in the Holy Cross Church, on the pillar where the urn with Chopin's heart is preserved. Smuggled into Poland after his death by sister Ludwika Jedrzejewicz, Chopin's heart was permanently entombed inside that pillar in 1882, with a tablet by Leonard Marconi.  The inscription from Matthew VI:21 ("For where your treasure is, there will your heart be also") explains Chopin's deathbed wish that his sister was instrumental in realizing - by taking his heart back home, to Poland.  The pillar, along with the whole church, was completely destroyed by Germans after the Warsaw Uprising, but they removed the heart for safekeeping before doing so. Now it is safely enshrined in the church pillar again. 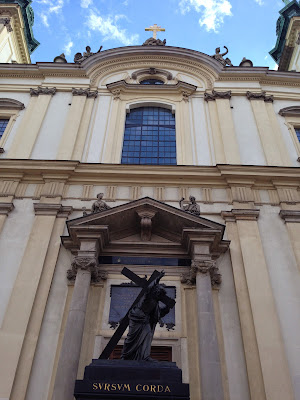 Entrance to the Holy Cross Church on Krakowskie Przedmiescie with the Christ sculpture, and  the "Sursum Corda" Inscription (Lift Up Your Hearts), 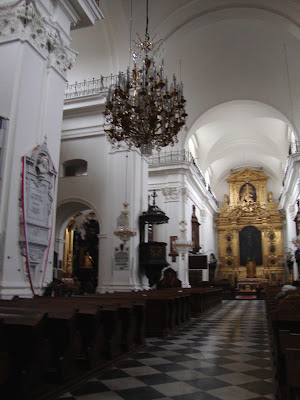 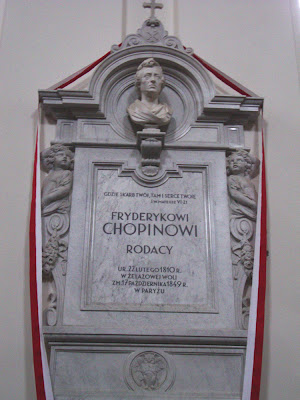 A closeup of the tablet with  its inscription and Chopin's bust.

Another plaque is found on the walls of the building where the Chopin family lived in 1820, now belonging to the campus of the University of Warsaw. As a graduate of the university, that incorporated the Warsaw Lyceum where Nicolas Chopin taught in the 1810s and 1820s, I feel quite connected to Chopin, even if my classes were in a far-off Geology building somewhere on the way to the airport (musicology being the study of petrified music, does belong with geology, no?).   I took this picture during the Second International Chopin Congress in 1999 and now cannot find it. 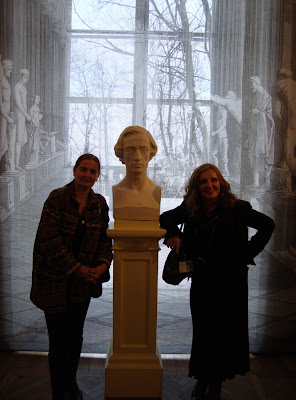 Instead, I found two photographs of Chopin's busts, one from Palac Kazimierzowski during the Third International Chopin Congress in 2010 (with Malgorzata Kalicinska), and one in the foyer of my other alma mater, Chopin Academy of Music, formerly known as F. Chopin State Higher School of Music and currently named Fryderyk Chopin University of Music. 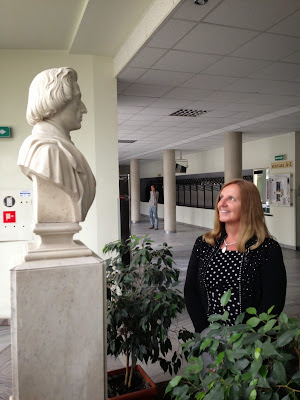 There were also quite a few official flags of the school, with its changing name and unchanging, iconic Chopin's profile. 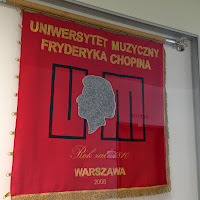 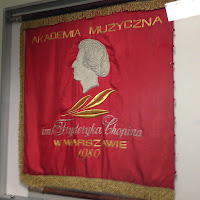 Official flags of the Chopin Academy (1970s-1990s) and the renamed Chopin University (current).

Having measured my nose against Chopin, and having lost that nose-to-nose competition, I went for a walk around town, and found Chopin everywhere. Well, not his likeness, but his music - present on recordings mounted into 14 dark basalt (or black marble) benches, with carved maps and captions. This was a gift to the city created for Chopin's bicentennial, marking the places important to his biography (the church he played the organ, the home where he lived, the place where he boarded the stagecoach to take him to Vienna, and then Stuttgart, and Paris). The benches are still attractive and educational, even though a few of the "press-the-button" music boxes stopped working by 2014 when I photographed them again. In any case, these are wonderful elements of Warsaw's landscape that capture the attention of passerby and, occasionally, fill the air with Chopin's music. 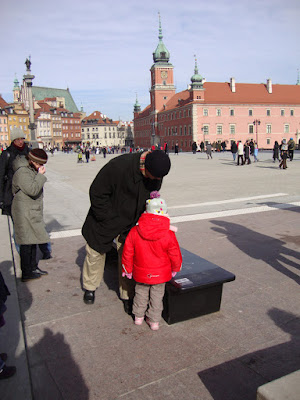 Here is the bench place at the edge of the Plac Zamkowy, the opposite side of the street  from St. Anne's Church.  Below is a fragment of the map. 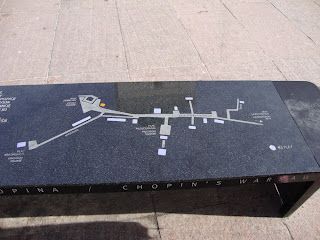 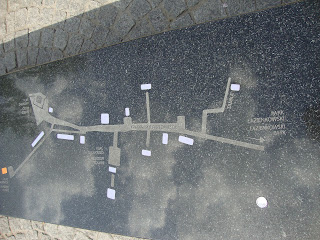 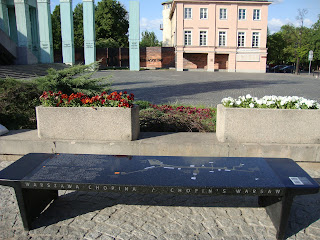 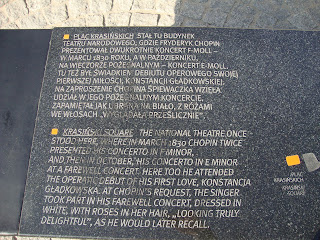 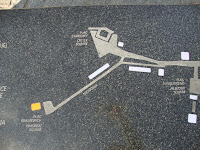 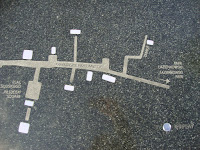 Map on the bench on Plac Krasinskich, yellow marks the location, the starting point.

Here's the list of Chopin Music Benches with their location and music played at each, the tour is described on Warsaw's official tourist page, though with musical errors in captions that I corrected below.

List of Chopin Music Bench Locations (according to Visit Chopin in Warsaw site, with added musical links to historical recordings of featured works):

1) The Krasiński Square – This square used to house the National Theatre building, where in March 1830 Fryderyk Chopin presented his famous Concerto in F minor.  This was also where in October 1830 he played his last farewell concert before leaving the country. The building does not exist any more and there is the Warsaw Uprising Monument on the square instead.  Krasiński Square – MAZURKA in A minor, Op. 17 No. 4; 39” - Listen to a version recorded by Arthur Rubinstein.

2) The Miodowa Street – The entire social life of the capital used to be concentrated here. The local cafes, such as Pod Kopciuszkiem, Dziurka and Honoratka - the venues of meetings for artists and young people - were visited by Chopin almost on a daily basis.  Miodowa Street - MAZURKA in A minor, Op. 68; 34” - Listen to a version  recorded by Serge Rachmaninoff

3) The Kozia Street – This narrow street used to be an important transport route in Chopin’s times. The U Brzezińskiej cafe was his favourite place to visit. Kozia Street – “HULANKA” song; 29” - Listen to a version recorded by Andrzej Hiolski, baritone.

4) The Wessel Palace – This was where on November 2nd 1830 Fryderyk Chopin got on a stagecoach and set out on his trip to fame – to Vienna and further to Paris. Wessel Palace – GRANDE POLONAISE in E-flat major, Op. 22; 35” - Listen to a version recorded by Krystian Zimerman in 1979.

6) The Saxon Palace (Palac Saski) – The Chopin family moved here in 1810, after Fryderyk’s father had accepted a job at the famous Warsaw Lyceum, which used to occupy part of the palace’s rooms. Saski Palace - MAZUREK in B-flat major, Op. 7 No. 1; 36” - Listen to a version recorded by Henryk Sztompka in 1959

7) The Saxon Garden (Ogrod Saski) – This was where the young Chopin entertained while he and his family resided at the Saski Palace (the former seat of the Warsaw Lyceum). Saski Garden – NOCTURNE in B major, Op. 9 No. 3; 47” - Listen to a version by Guiomar Novaes, 1959, the Nocturne starts at 9'53''

8) The Visitants’ Church – In Chopin’s times Sunday masses for students of the Warsaw Lyceum used to take place here, during which Fryderyk Chopin, aged 15, used to play the organ, performing the function of the Lyceum organist. The Visitants’ Church - LARGO in E-flat major (Op. posth.); 46” - listen to the Largo played by Anatol Ugorski.

9) The Kazimierzowski Palace – In 1817 the Warsaw Lyceum, and the newly-established Warsaw University, were located here. The Chopin family came to reside in the right-hand annexe (the Deputy Rector’s Building). Kazimierzowski Palace - WALTZ in E minor (Op. posth.); 45” - Listen to four historical interpretations of the Waltz from the early 1900s: Moriz Rosenthal, Leopold Godowsky (starts at 2'58''), Sergei Rachmaninoff (4'45''), and Josef Hofmann (recording of 1916, starts at 6'36'').

10) The Czapski Palace – The Chopin family moved here in 1827 and Fryderyk got a room in a small garret, equipped with a piano. Located at Krakowskie Przedmiescie no. 5, it now houses the Academy of the Fine Arts.  The former residence of the Chopin family, located on the second floor, now features the Chopin Parlour museum with period furnishings. The Czapski Palace – WALTZ in D-flat major, Op. 64 No 1; 42” - Listen to Valentina Lisitsa playing the "Minute Waltz" in 1'48'' with extra slow trio and a wide range of tempi.

11) The Holy Cross Church – the place where Chopin’s heart rests.Holy Cross Church – FUNERAL MARCH (Marche funebre) from SONATA in B-flat Minor, Op. 35; 45” - listen to a fascinating interpretation by Ivo Pogorelic from the early 1980s, the March starts at 17'18''.

12) The Zamoyski Palace – Chopin’s sister, who gathered the souvenirs of her brother, used to live here. In 1863 an attempt on the life of a Tsar’s governor was made through the palace windows, in retaliation for which all the tenants were removed from their flats and their entire property was destroyed. Among the objects thrown through the windows and burned was Chopin’s piano. Zamoyski Palace – ETUDE in C minor, Op. 10 No. 12; 42”  - Listen to an interpretation of the "Revolutionary Etude" by Stanislaw Bunin from 1985, the year he won the Chopin Piano Competition in Warsaw (2'37'')

13) The Gniński - Ostrogski Palace – The seat of the Fryderyk Chopin Museum, next to which the Chopin Centre is located. Gniński – Ostrogski Palace – BALLADE in F minor, Op. 52; 42” - Listen to an interpretation recorded by Krystian Zimerman for the Polish TV in ca. 1979, four years after he won the Chopin Piano Competition (11'22'').

14) The Fryderyk Chopin Monument in Lazienki Park – The most famous monument of the composer in the world is located in the Łazienki or Łazienkowski (Royal Baths) Park, opposite the park gate in Aleje Ujazdowskie, near Belvedere. The Fryderyk Chopin Monument – POLONAISE in A major, Op. 40 No. 1; 39” - Listen to the "Military" Polonaise played by Josef Hofmann in 1923 (3'21''), by Arthur Rubinstein in 432 Hz natural tuning of the piano (3'45''), with its dramatic tempo differences and heroic expression, by Halina Czerny-Stefanska in the 1970s (5'16''), with its plodding, systematic, pedagogical evenness, or by that maverick of Las Vegas pianists, Liberace (3'23''), playing it as musically as the grand old masters.