Chopin With Cherries: A Tribute in Verse 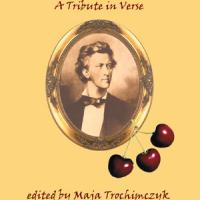 For those who have been moved by the music of Fryderyk Chopin, this new international anthology will be a treat. The collection was created to celebrate the 200th anniversary of Chopin’s birth. There are over 120 poems in the collection. T.S, Eliot, Amy Lowell, and even Emma Lazarus of Statue of Liberty fame are included in this tribute volume. But one breathtaking aspect of the anthology is the diversity of voices, both stylistically and  geographically.

The poems themselves address a variety of subjects including Chopin’s love life, his chronic illness and early death at thirty-nine, the political upheaval he experienced and of course the music itself. Some of the poems strive, in an historical sense, to create a mood, or to dramatize what it must have been like to be Chopin in his time. Others describe the music in its many forms, a particular piece, whether etude, sonata, mazurka, waltz, prelude and so on. There are poems about Chopin’s long and tempestuous relationship with George Sand, his lover who eventually became his nurse when his health deteriorated. In fact, one of the striking aspects of the anthology is the way in which the editor, Polish born Maja Trochimczyk, arranges the various sections, not only by musical forms, but also into sections like beauty and death, words that often come to mind when considering Chopin’s life, his passions and his early demise. Interestingly, Chopin’s body was buried in Paris, but his heart was taken to Warsaw where it was enshrined in a church.

Another intriguing part of this anthology is the use of 19th and 20th century postcards and engravings, which create quite an atmosphere in which to read the wide array of poems with a Chopin theme.

In the end, the poems speak for themselves. The poems come from, unexpected places like North Dakota and New Mexico. In Chopin Etude, Las Cruces poet Joseph Somoza writes of a desert evening.

I sit with the window open

And listen to the breeze Chopin heard

One hundred and fifty years ago

Texas poet Charlotte Jones also notes a personal experience in POSTHUMOUS when she writes of her sister, who once played Chopin while the poet played Bach. Her sister died young, the same as Chopin. Jones describes the feeling of returning to the piano twelve years later to play Waltz in A Minor (Op. Posthumous).

Now I understand what my sister meant:

the romance of running from life,

my face, tear-stained as I practice.

One poem that impressed me with its powerful and haunting images was written by the late, Ukrainian born William Pillin, who wrote about the literal act of Chopin composing.

White and wasting he dotted

with splashes of blood his lunar pages

There is, finally, the simplicity of Chopin by Alison Ross, who reminds us how often music is a labyrinth of tears.

Perhaps this is what draws us to music, or music to us.