Górecki, Chopin and the Mountains 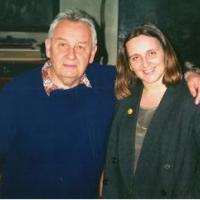 In the summer of 1997, I traveled to the mountain town of Zakopane, in Podhale (the Foothills) area of Tatra Mountains, to persuade Henryk Mikolaj Górecki to come to Los Angeles for a residency at the University of Southern California, called the Górecki Autumn. He conducted his Third Symphony, in a historical, legendary performance that lasted good 10 minutes longer than any other. . . I was his personal translator and accompanied him everywhere, like a substitute daughter (my middle name is hers, Ania).

We talked a lot (a short interview appeared in the Musical Quarterly in 1998), but for an in-depth musical conversation I had to go back to Poland. In April 1998, we shared a plate of his wife's beet soup, and hours of conversations about music. He played for me Chopin's Mazurka in A-minor op. 17 no. 4, his favorite one. He talked about musicological discoveries that excited him, though soon faded into obscurity in the academic world of changing theories and fashions. Here is a fragment of that interview I translated and published in 2003.

Maja Trochimczyk:  Thank you for agreeing to talk to me today. I have a lot of questions to ask. Where shall we start?

Henryk Górecki:  I would like to share with you my excitement about a true musical revolution. Grzegorz Michalski first told me about this discovery which was announced during a small musicology session in Warsaw. During the session, Jan Węcowski - I'm sure you know him - revealed a bit about the mystery that he is working on.[2] In his study he proves that Chopin used Polish religious church songs in his works. I called him up and talked to him on the phone. He confirmed that - and I quote - Chopin arranges old Polish church songs. But this has never been mentioned before! Never, in no books! Of course, we know about his use of the Christmas carol, Lulajże Jezuniu, but this is just the beginning. I have never seen anything like it and I have seen a lot of research on Chopin; I have a lot of books. Nobody mentions it. But if this is true, and it has to be true, because Węcowski is a serious fellow and knows what he's doing - then we have a true Chopin revolution.

Węcowski told me: Do you know what a tragic character Chopin really was? Of course, we know all the cliches, all the banalities about the revolutionary etude, the struggle, the uprising, the bayonets. . . This is a 90 percent martial matter. We have attached this image of a revolutionary patriot to Chopin. At the same time we have this image of Chopin as a "ladies' man" who sits at his instrument and reflects about the lost Poland and does nothing really. All these obertas, kujawiaks, are nice, but nothing more than nice. But if you could prove that he actually used church songs, that have texts that mean something, not only the folk mazurkas, but also the expressions of folk spirituality, then we see how Chopin returned to the foundations, to the roots from which all the music grows.

Similarly you have Szymanowski using the material from Skierkowski's collection.[3] You know, if it weren't for Skierkowski, if it weren't for the Kurpian music, this Szymanowski would be very poor. In the end he found the material that he had been searching for. And Skierkowski helped him a lot with that. He went beyond górale music which is somewhat one-dimensional. It is rich, do not misunderstand me, but it is one-dimensional. One or two melodies suffice to give the whole technical image of this music. In contrast, Kurpian music is built from melodies, melo-structures based on intervals. It is much more complicated and it is certainly not accidental that Szymanowski turned his ear, so to speak, towards this region.

But we have to know that church songs are 90 percent folk songs. These are folk songs that were created over centuries: at first there were old plainchant melodies, already adjusted to the needs of the people. The pastor sang his music and the people listening to him transformed the music in their way. They wrote new texts, etc. It is also interesting that Węcowski is going to publish a Dictionary of Polish Church Songs simultaneously with his study on Chopin. Most probably a lot of these songs were already forgotten. Therefore, for me it is completely different. Or, not completely different. It is the Chopin revolution.

HMG:  It is a revolution because the whole mystery of Chopin's craftmanship, of Chopin's music - of this amazing genius is - now explained. You know that geniuses do not fall from the sky. The fact that you have hearing, that you have memory is good, but it is not enough. . . Something else is needed for me to be "myself."

HMG:  Yes, Chopin - who learned how to move his fingers quickly over the keyboard - had a good memory: he knew almost all music, he was sensitive, attentive, erudite, but that was not all, that was not enough. He knew all the piano literature, but in order to be "Chopin" he had to do something special within himself, inside himself. These sounds were in his mind; one person would say that they were in his heart, someone else that they were in his head. Composers are like that. Somewhere within us the music sounds, we are surrounded by these sounds. But what would one do with all that music? This is an incredible truth, an incredible discovery. It is clear that it was filtered through his education, his knowledge but that there was the source for his melodies. There is no other melody like Chopin's.

MT:  It is often said that Chopin's melody is derived from the opera, especially from Bellini.

HMG:   But it has nothing to do with Bellini! Look: Chopin's harmony naturally develops from his melodies. Just look how different he is from his contemporaries: Hummel, Spohr, Field. There are lots of them, but he is different. But he did not fall down from heaven here, he did not come out of nowhere. He knew the music literature. He had to know it. He collected all these new things and distilled them into his harmonic language. Bach also collected and distilled the religious music of his time. Chopin alone collected Polish songs. After Chopin it was all over. After Chopin one could not go further along the same path, because he did it with such genius. There were many other composers in his time: Kalkbrenner, Field... Hummel will remain Hummel, Bellini will remain Bellini. . .

But Chopin's music was not about Bellini! This is a half-truth that someone heard somewhere and which keeps recurring. But they do not repeat that Chopin played and remembered Bach's fugues and preludes until the end of his life. Nobody talks about the fact that once, after a concert he gave his favorite student the score of Beethoven's Fidelio, not Bellini. He bought this score for his student, so, he knew what Fidelio was. He also knew what Bach's fugues were.

Now, consider this: Bach's head was also filled with his Protestant chorales and with his own church songs. You can see it everywhere, every note of Bach's music stems from this source, not from the music of other composers that surrounded him. And now let us look at Chopin: It is truly amazing to discovered that he did the same thing as Bach, that he turned to his own religious folk songs for sources of material, for inspiration. I am very grateful to Jan Węcowski for his work on Chopin's use of Polish church songs. I regard musicological studies of this kind highly, studies that I can take and use, studies that teach me something.

Maja Trochimczyk:  In the light of a recent fashion to bring Chopin's music entirely to the level of its relationship to the Italian opera of the early 19th century, Górecki's comments are fascinating. The interview continues, moving on to ancient religious anthems (Bogurodzica), the golden section, and the topic of motherhood and mothers, prominent in the Third Symphony. Since I dedicated to this topic a whole article, Mater Dolorosa and Maternal Love in Górecki's Music, I see no reason to further discuss it here.

In the interview, Gorecki described his own approach to composing. He spent hours and years crafting pieces with deep connections to the history and spiritual roots of Polish music. When Kronos commissioned the Third String Quartet, the work materialized 12 years later. He could have written 20 quartets in this time, but he worked on one, the right one - a piece of music in which every note is in its place, every chord belongs. There are no random fillers, materials "just so" - everything has its meaning and its function in the overall design. It may be deceptively simple, but being crafted so well, it will survive centuries.