The Economy of Culture in Europe 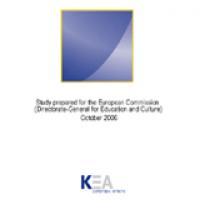 Following an open invitation to tender (DE), the European Commission selected KEA European Affairs to carry out this study. KEA worked together with Media Group (Turku School of Economics) and MKW Wirtschaftsforschung GmbH.
This study is a first at European level. It highlights the direct (in terms of GDP, growth and employment) as well as the indirect (links between creativity and innovation, links with the ICT sector, regional development and attractiveness) contribution of the cultural and creative sectors towards the Lisbon Agenda.

We invite you to read the report in its entirety as well as the executive summary (soon also available in French and German).

Plik 3 - The Economy of Culture in Europe - Background and Context

Plik 5 - Mapping out the Economy of Culture in Figures

Plik 7 - A Strategy for a Creative Europe