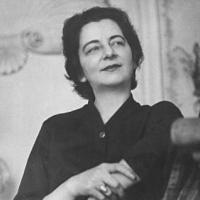 Grażyna Bacewicz was a Polish composer, violinist, pianist and a writer. She was born in 1909 in Łódź, and died in 1969 in Warsaw. Her teacher, Nadia Boulanger, said with emotion:

When as a young girl she came to Paris, she showed great talent, which was to develop constantly for many years. (…) Bacewicz’s talent was fully formed in Warsaw by Kazimierz Sikorski was (…) Grażyna, as almost each of my Polish students, had received solid education, both classical and contemporary[1].

The first, adolescent, highly experimental, the second, mistakenly called neoclassical in our country and essentially tonal, and the third, to which I still stick. I have attained it in a way of development (not revolution)[2].

Nonetheless, in a Bacewicz Grażyna entry in The New Grove Dictionary of Music and Musicians[3] and in Encyklopedia Muzyki[4], researchers focus on describing her output as neoclassical. The composer herself objected to the “neoclassical” label:

For ten years I have been watching a certain phenomenon in our musical environment that concerns me (I apologize for writing about myself) and I have to confess, that with every year that passes by, a bigger astonishment overwhelms me. In ancient post-war times my output was labeled as neoclassical. In those times it was not baseless. But my work has undergone changes. (…) A label once given is still current for them [the researchers – author's annotation]. This way the actual state of affairs is distorted. For nine years I have found this fact amusing. Now it has stopped amusing me[5].

The label was born early – after her first international success in 1933, when she won first prize for her Woodwind Quintet in a competition organized by an association supporting women working as freelancers[6].

In particular stylistic periods, Bacewicz adhered to her own techniques, which is why her pieces are quite uniform. But she was not content with what she had developed – she combined her favorite classical forms with sonoristic techniques, she made liberal use of dodecaphony, she used controlled aleatory and folk music, from whose rhythms and melodies she drew inspiration. She created her own musical style. Tadeusz Zieliński said:

That composer, who avoided the most extreme means of the contemporary avant-garde, succeeded in creating a separate, autonomic artistic phenomenon, naturally combining certain contemporary achievements with the aforementioned aesthetic attitude. It is a phenomenon, interesting on an international scale[7].

In turn, this is what Witold Rudziński said about her output:

We have to admire her enthusiasm, with which she absorbed new currents, and at the same time her instinct, which prompted her what to include in her arsenal of achievements, and what to refuse in order not to lose that which is the most important for every artist in the end: their own artistic countenance, own artistic individuality[8].

Bacewicz’s output is a milestone in the development of Polish music in 20th century. In the article Ostatnie utwory Grażyny Bacewicz (The last works of Grażyna Bacewicz) Tadeusz Zieliński wrote that her output is one of the most important elements of Polish contemporary music and as we look closely at it, we will see that its role is indeed immense. He concluded that she created the next great tradition of Polish music, the first one after Karol Szymanowski[9].

Polish composer, Tadeusz Baird, was impressed by the size and the affluence of her output too. He emphasized her ability to express herself in almost every musical form from the symphonic cycle to the instrumental miniature, at the same time creating unique style which was impossible to falsify, just as the most versatile masters of the past[10].

What was extremely important were the roots – the folk music. It can be proved by a fragment of Małgorzata Gąsiorowska’s book about Bacewicz, in which she writes that folk intonations were natural for the composer’s workshop and many of her works were permeated with folk rhythm or melody[11].

In turn, in a documentary film about the composer states that:

Folk intonations are a constant element of many of her works. Doubtlessly, the first impulse that lead the artist’s imagination towards folk music were the accomplishments of Karol Szymanowski. The author of "Harnasie" in his deliberations on national art, raised the authority of Fryderyk Chopin and many other great composers. This thought was later used by social realism ideologists, who recommended using folk quotations in concert pieces. The drawing from folk motives by Grażyna seems to be something independent of the conditions. Folk intonations sound as natural in her late "4th String Quartet" as in her adolescent Woodwind Quintet[12].

We can find opinions that folk-based Bacewicz’s output is only an attempt at accommodating to the Polish political climate. Adrian Thomas wrote about that in a booklet:

1951 was the highpoint of the Polish government’s Stalin-inspired doctrine of socialist realism in the arts. This demanded an overt connection to the lives and experiences of "the masses", which usually meant a simplified language and often the use of native folk tunes. It also favoured monumentalism and an optimistic tone, especially at the end of works[13].

Whereas the composer spoke favorably about the government’s orders for music pieces („I prefer to receive them from the government than from a certain individual. Don’t think that we’re writing only mass songs. I receive orders for quartets, symphonies, concertos, pedagogical pieces”[14]), Wanda Bacewicz denied strongly the „subjection” of her sister:

Grażyna was the only Polish composer that did not write any mass song or cantata. She wrote pedagogic pieces so terribly needed at that time. And she also wrote, but not because of an order, she wrote pieces based on folklore, such as the "3rd Concerto" and there were many pieces of this type. But there also wasn’t anybody who ordered Bartok to write music based on folklore[15]”.

Now let us concentrate on three pieces by Grażyna Bacewicz – the 1st Oberek, Polish caprice and the 4th Violin concerto. The element common to the compositions, besides the folk inspiration, which I aim to prove, is the usage of violin as a primary instrument. It is mainly because of the fact, that she was violin player, but maybe usage of fiddle is another proof of folk influence?

Małgorzata Gąsiorowska said about the 1st Oberek and Caprice that they are „marvelous pieces for an encore”[17]. The title of the first composition itself suggests the influence of Polish musical tradition. Oberek is a national dance, whose name comes from the rotating dance movement. It is the fastest of Polish mazurka-rhythm-based dances. Its another name is ober or obertas. Lightness and agility, repetitions of melodic and rhythmic figures, a majority of tiny rhythmic values and figurations are characteristic of it. Its metre is 38 or 34.

Ludwig Erhardt wrote about this piece:

Its simple and straightforward structure, exposing the violin part, is by no means equivalent with accessibility of this music to the player. Really fast tempo, frequent usage of double-stops stylized in a folk-like manner, varied articulation – all this is a virtuoso exam, that only a composer-virtuoso could make up for a performer[18].

References to the Polish dance are seen mainly on the rhythmic side of the piece. This work is in 34 and tempo presto. It is based on movements of eighths. There are, like in the original folk dance, irregular accents on second and third beat in a bar. Not only does the accompaniment have to complete chords, but also underline these accents. We can see it, e.g. in the 7th bar. 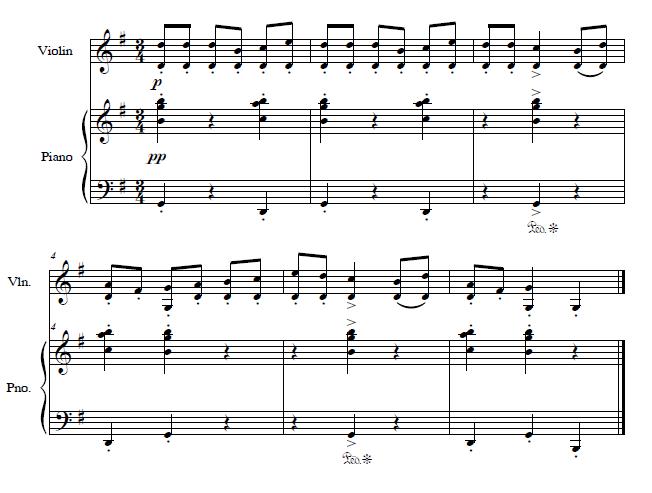 Repetitions of melodic and rhythmic schemes are characteristic of this composition – we can imagine dancers performing rotating figures. The composer uses parallel fifths (bars 29, 30

Melody is lead in double-stops where one of the sounds is constantly repeated and it sounds almost like a bourdon:

These are the methods to make the work folk-like. There are also elements of contemporary composition techniques. The composer juxtaposes keys without modulation – e.g. D-major, B-sharp minor and A-sharp minor. There are tritons in the accompaniment

The composer uses such articulation as spiccato, pinch harmonics and chords played pizzicato, in which there are simultaneous sounds with and without alteration (e.g. G 3, E-sharp 4, D-sharp 5, E 5 or G 3, A-sharp4, E 5, G-sharp 5)

These newer elements are characteristic of Bacewicz’s musical language.

Polish Caprice is a virtuoso piece for violin solo.

It begins in slow tempo (Andante) in 34, though the melody seems to sound in 24. at the beginning. The melody is based on a heptatonic scale, that consists of g, a, b, c, d, e. After that introductory fragment, the tempo changes into Allegro non troppo and 24. There are developments of the melody based on a rhythm:

As in the 1st Oberek, there are folk influences, but contemporary ones too – changing registers, fast figurations, chords, and various articulations.

The 4th Violin concerto is full of folk influences, however, they are not explicit. We can feel a Polish climate.

Polish folk material is used a few times in this dance-like "Vivace". In the "Andante tranquillo", as in her other slow movements, Grażyna Bacewicz creates a unique atmosphere that for me personally often brings to mind familiar feelings or images of the Polish landscape[20].

We can see inspiration in 2nd theme of the 3rd movement. It is a stylization of Polish national dance from Krakow’s region. It is called krakowiak. The characteristic feature of this impulsive dance is that the rhythm in 24 and there are lots ofwith syncopations which brings the accent in bars to the weaker part of it. 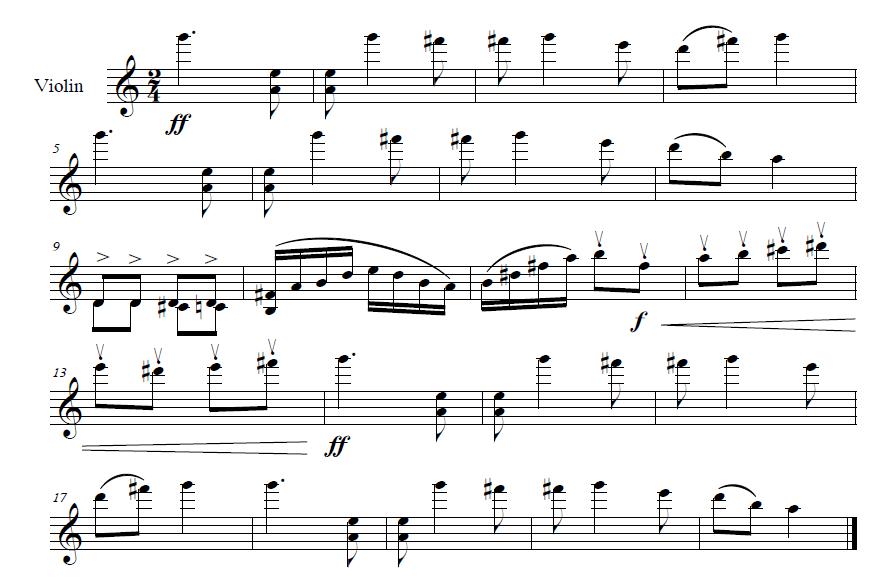 Undoubtedly, Grażyna Bacewicz’s work is worth analyzing and listening to. While the figure of female virtuoso was not something new in the 20th century, the figure of a female composer was surprising. Witold Rudziński dared to say:

I often said that she was the greatest composer since, well… Safona’s times. And she was indeed, because no female composers up until her times had been so outstanding, and in the romantic period they never left the living room[21].

She proved that composing is not only the domain of men! After all she proved inarguably that she can not only equal them, but stand in the very first row of the world's most prominent composers[22].

Grażyna Bacewicz’s output is a proof that folk music can be, also in the 20th century, an inexhaustible source of inspiration. Such a simple, sometimes primitive folk music material can be used for studying the sounds’ secrets. This is not a material that leads, as the composers of Young Poland were afraid of, to backwardness of the music and to its stagnation. It can be quoted or stylized. Grażyna Bacewicz’s output shows the national element as constantly attractive and as an inexhaustible source of inspiration. Her works prove that basing on a material that is characteristic of one's own country we do not have to give up contemporary techniques or our own musical language.

[5] Bacewicz, Grażyna a quotation from letter to editors of Informator Muzyki Polskiej.

[14] Bacewicz, Grażyna a quotation from a letter to her brother Witold, quoted by Gąsiorowska, 185.