Women Conductors and Teachers - as Emerging from the Shadows 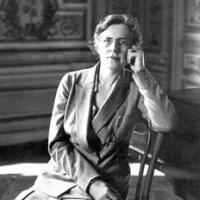 Nineteenth and early twentieth centuries, is not only the time of flowering of the salon music, the emancipation of women and the birth of a musical canon, but also the time when the woman composers, conductors and teachers figures appear in a world highly dominated by men, the world of music. Let us look at this period and see what changed to allow women become conductors and university teachers.

This respected choral mentor told me that it shouldn’t make any difference who was standing on a podium, male or female, and that what would matter is my ability – and wide-eyed and innocent, I believed him. I believed I would be evaluated in my university teaching according to my musical and academic skills, as I had been during my university training. It was actually very much more than just that” (Hansen, 2009, p. 183).

It is known that becoming an orchestra musician was difficult for women for a long time because they had to overcome many prejudices. So far greater challenge, was for them to become conductors and to take over the role of the priest celebrating philharmonic devotion (Gwizdalanka, 2001, p. 162). It is not surprising for us anymore to see a women conducting choirs and small orchestras, but even today, it is still a sensation to see a woman conducting a professional symphony orchestra. Norman Lebrecht in his study acknowledged that it is easier for a women to be entrusted a prime minister for the whole term, than to be allowed to conduct the prestigious orchestra for a few hours (Ibidem). Unfortunately, today it often still looks like this. In this section I would like to focus on women conducting instrumental ensembles/orchestras.

Nineteenth and early twentieth centuries brought some changes. A few amazing women appeared on the musical scene, who became some of the first great women conductors. In 1890, Cecile Chaminade, a French pianist and composer, aroused a sensation because she dared to stand behind the conductor’s desk. Similarly, in the same period in the United States Caroline Nichols was acclaimed a female orchestra conductor (Boston Fadette Lady Orchestra) (Bowers, Tick, 1987, p. 326). Nichols even had an article about herself that appeared in "Pittsburg Gazette Times" entitled "How One Women Carved Out a New Avenue of Bread Winning Sex for Her". In this article her versatility (she was a conductor and violinist who could additionally  play almost any other instrument) and knowledge was emphasized (she had a profound knowledge of literature and music theory) (Ibidem, pp. 194-195). In turn, Ethel Smyth, paradoxically, was taken more seriously by her countrymen as a conductor than as a composer. It is worth mentioning that her first opportunity to conduct an orchestra was because conductor of the Berlin State Opera, where her opera "Der Wald" was performed, Karl Muck, was indisposed (Ibidem, p. 310). Ethel Leginska, a great pianist and conductor, was first to conduct a hundred people  Philharmonic Orchestra in Boston in 1920 (all women). After a concert critic spoke of her as follows:

She has made a strides as a conductor, and although we are handicapped by an unexplainable distaste for women as orchestral leaders, it is only fair to report that she sensed and projected the grave beauty of the Brahms Symphony [no. I in C Minor, opus 68] and that the Prelude to Wagner’s masterpiece [Die Meistersinger] was performed in a way that revealed its essential spirit (Ibidem, p. 357).

The controversy also raised over Antonia Brico, who was the first woman conductor to receive a prestigious invitation from the Metropolitan Opera in New York. Unfortunately - due to the baritone John Charles Thomas – she was released after two performances. He did not want to be directed by a woman (Gwizdalanka, 2001, pp. 162-163). Brico conducted Brico Symphony Orchestra for many years and she also established a Women’s Orchestra in New York (later transformed into a mixed orchestra). She mentioned the difficulties encountered by a woman conductor in the world of music, saying that for many years she was regarded "persona non grata" (Neuls-Bates, 1996, pp. 256, 258). Europe is also famous for another great woman in the field - Nadia Boulanger. In 1913, she hosted a concert at the Deutsches-Lyceum-Club in Berlin, where she conducted Raoul Pugno (one of the finest solo pianists of his era) and the orchestra. In addition, in 1936 she conducted the London Philharmonic Orchestra (as the first woman in the 120-year history of this band!), in 1938 – Boston Philharmonic, and a year later, the New York Philharmonic (Gwizdalanka, 2001, p. 163). Despite the success she was often being joked about by members of orchestras, as a professional conductor however, she never allowed those biases to stop her from continuing her career. Another woman conductor, Frederique Petrides, who learned her profession, among others, from Dimitri Mitropoulos, deliberately acted to improve the situation of women in music. A motivation for her was to see talent of her mother, violinist and composer, wasted (Neuls-Bates, 1996, p. 259). Petrides conducted the Orchestrette Classique (Orchestrette of New York), several other orchestras, male and mixed, and in the years 1961-1977 was also a director of West Side Orchestral Concerts (Ibidem, p. 264). It is important to mention at least a few other names - JoAnn Falletta (Women’s Orchestra of San Francisco), Eva Anderson (Women’s Orchestra of Long Beach), Ebba Soundstrom (Women’s Orchestra of Chicago), Mary Passmore (Orchestra of the San Francisco Symphony) (Ibidem, pp. 248, 257, 267).

In recent decades, the number of women facing the conductor’s podium strongly increased. Weronica Dudarowa headed the Moscow Symphony Orchestra since 1960, Sarah Caldwell founded and conducted the Boston Opera Company, Sian Edwards directs English National Opera since 1993, in Australia Simone Young is making a career and is being invited to conduct operas in Germany, Austria and the USA. In Poland there were three excellent women conductors - Ewa Michnik associated with opera in Krakow and Wroclaw, Agnieszka Duczmal, who was leading chamber orchestra of Polish Radio “Amadeus” for 30 years and Joanna Wnuk-Nazarowa, who was a minister of culture and art (Gwizdalanka, 2001, p. 165). But still the name of woman conductor on a poster announcing a symphonic concert is quite rare, which is surprising, considering that conducting classes show the progressive feminisation.

It is important to note a huge change in the situation of women in the world of music, a change that took place not only in the fields of composition and conducting, but also in the field of education. It is known that teaching has never been socially unacceptable for women, but in the case of universities and academies of music the situation was slightly different (as composer Joan Tower, who had the opportunity to teach at Bard College, New York says: “I would note that when I travel to other universities around the country, I rarely meet another women composer on the faculty” (Neuls-Bates, 1996, p. 357). A significant number of women devoting themselves to teaching (in the U.S. it was about 43 percent in 1880, and 66 percent in 1910) is also a proof of this, that there were limited opportunities for women in other musical professions (Neuls-Bates, 1996, p. 184). Few musically educated women had a chance to remain professional instrumentalists, conductors or composers. To somehow make a living, they decided to become teachers. This problem is mentioned, among others, by Frederique Petrides. She decided to creat a female orchestra for a particular reason:

I wanted to show that women could do more than just teach, because teaching at that time was the major means of livelihood form women instrumentalists [other than solo work], and if you didn’t like teaching, well, that was just too bad! There simply wasn’t any other choice! (Ibidem, p. 261).

Some outstanding teachers, such as Clara Braun, Julia Crane Etti and Emma A. Thomas, founded their own schools or conservatories, others worked in public schools, but most women were private tutors, teaching mainly piano and singing (Ibidem, p. 184). Compared with men, women received far less money for such lessons. An outstanding educator was certainly twice mentioned Nadia Boulanger. Her salon in Paris, among others, was frequently visited by Maurice Ravel, Igor Stravinsky, Albert Roussel, Darius Milhaud, Arthur Honegger, Francis Poulenc, Georges Auric. For learning with her, students were ready to travel a long way from different parts of the world – she had students coming not only from America but also from Turkey, Poland, Chile, Japan, England, Norway and other countries (Ibidem, pp. 242-243). Why? Let’s see what one of her most famous students, Aaron Copland, said about Nadia:

Nadia Boulanger knew everything there was to know about music; she knew the oldest and the latest music, pre-Bach and post-Stravinsky, and knew it cold. All technical know-how was at her fingertips: harmonic transposition, the figured bass, score reading, organ registration, instrumental techniques, structural analyses, the school fugue and the free fugue, the Greek modes and Gregorian chant (Ibidem, pp. 243-244).

He mentions many great artists who were taught by Boulanger (French: Igor Markevitcha, Jean Francaix and Marcelle de Manziarly, Americans: Walter Piston, Virgil Thomson, Roy Harris, Marc Blitzstein, and a younger generation: Elliott Carter, David Diamond , Irving Fine, Harold Shapero, Arthur Berger and Easley Blackwood) (Ibidem, p. 246). In 1959, Nadia Boulanger received an honorary degree from Harvard University, and in 1967 an honorary doctorate from the State School of Music in Warsaw. As I mentioned at the beginning, women had and continue to have difficulty in obtaining a teaching job at universities. It does not necessarily apply only to the field of music, but it is this one that I would like to briefly discuss here. You can name a few issues on which attention should be paid, taking this topic (Hansen, 2009, p. 185):

It is connected with the stereotypical perception of the characteristics of men and women, and the fact that society tends to value the work of men more than the work of women. It is often believed that a woman teacher from the very nature of things causes dissonance: she is in a position of power, in a place that is not traditionally intended for her. Although women certainly are making progress when it comes to fighting a place at universities, the process is too slow, especially in areas traditionally considered  as masculine, such as science, mathematics, and in music, conducting.

There are some attempts to change an unfavorable atmosphere for women at universities - such as the University of California, together with the Sloan Foundation Grant recently created a project called UC Family Friendly Edge System, designed to introduce a more friendly environment for all teachers, especially women (Ibidem, p. 200).

Hopefully, the process of improving a situation of women in this field will continue. Indeed, we see that enabling women’s full participation in the practices of music results in the emergence of a growing number of prominent women who prove that they, contrary to the proclaimed views for a long time, are creative and talented – and just had far less opportunities to show that.