"... the main notion of period instrument performance is that the instrument of a particular era can reveal idiosyncrasies and characteristics that might otherwise be lost." Interview with Geoffrey Govier 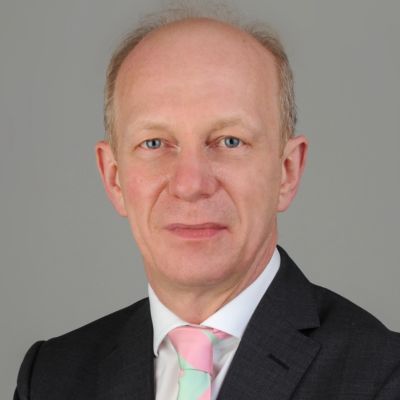 Dr Geoffrey Govier is one of the leading British exponents of the early piano. Having studied modern piano at the Royal College of Music in London from which he graduated with first-class honours, he studied fortepiano first privately with Melvyn Tan in London, with Stanley Hoogland in Amsterdam and then gained his doctorate from Cornell University, Ithaca, New York studying with Malcolm Bilson.

He has played in many parts of the world, including Europe, New Zealand, the far and Middle East, and America both as a soloist and a chamber musician. He has been fortunate to play with many key figures in the period-instrument movement, including the singers Charles Daniels, Catherine Bott, Gerald Finley, the horn player Andrew Clark, and the chamber groups The Revolutionary Drawing Room and Ensemble Galant with whom he has made a number of recordings (BBC, Olympia, EMI and Hyperion).

Maurycy Raczyński.:  What matters ultimately in the performance of the keyboard music of the eighteenth or nineteenth century? What is more important: An instrument as a native speaker” (an expression taken from your interview with Agata Mierzejewska) of some period/composer/piece or the stylistic knowledge of the performer who has to deal with playing different instruments?

Geoffrey Govier: I think that what matters in the performance of eighteenth- or nineteenth-century music is the same for any other period and that is that the primary emotions or Affekts of the music should be powerfully and directly communicated in the performance in as coherent and convincing a manner as possible. As a player of early pianos, I find that these instruments allow me to get to the heart of the music more easily than the modern piano. I also think that the sound of these pianos discourages an acceptance of performing traditions and encourages a reappraisal of the music that makes it fresher. To give a practical example, the less resonant sound of a Viennese fortepianos of the late eighteenth-century puts much greater emphasis on articulation and allows the player to explore the extremes of range of dynamic in close proximity in a way that would be much more difficult to achieve on the modern piano. The range on the Steinway is so huge that using the extremes challenges (at least for me) the coherence of a melodic line. As a result, the dynamic and expressive range is (again for me) somewhat compressed and, whilst potential beautiful, lacks the emotional agility of the instruments for which this music was conceived.

It is very tempting when regular pianists get onto a fortepiano to try and make it sound as much like a Steinway as possible since "that is what pianos are supposed to sound like". However, it is essential that the true character of the instrument is allowed to speak so that we can learn from them what are seemingly the most important expressive aspects of the music. If this is not done, then playing on fortepianos is ultimately extremely frustrating since they are being asked to do things that they are not designed to do. If I really want to annoy pianists I ask them to imagine that they are a tuba player who desperately wants to play the Mendelssohn Violin Concerto on the tuba. They emphasize that the tuba is much better than the violin, having much more resonance and power. They might consider whether listening to the violin would help with their interpretation. In my admittedly somewhat biased viewpoint, this situation, which is often seen as ludicrous, has direct parallels with a modern pianist playing a Mozart piano concerto on the Steinway. I love many performances on modern instruments and I am, incidentally, also a fan of the tuba but if want to get to the core of the meaning and expressive heart of the music, I find that early instruments provide a more direct route.

G.G.: I find playing chamber music on period pianos extremely rewarding and this probably takes up the bulk of my performing activity. There are certain similarities in the way that instruments have evolved, whether a piano, cello or oboe etc. However, there are also some differences in the rate of change and this can cause some problems; for example, the writing in Baroque orchestral music when trumpets and oboes are in thirds is less convincing on modern instruments since the two have diverged dramatically over the course of time since. As a consequence, the trumpets tend to swamp the oboes in volume. The same can be said of the piano and a number of instruments. Cellists therefore are often extremely keen on working with early pianos since problems of balance are less evident. Also for the pianist, having an instrument that you don't have to restrain allows more liberty and abandon in performances. I remember playing Schubert's Schwanengesang with the baritone, Gerald Finley and feeling that there was the potential for the voice to overpower the piano. That is an expressive element that is rarely felt on the modern piano!

M.R.: Could you tell us how you started your interest in early piano? What/Who had an influence on your decision to specialise in this?

G.G.: I became interested in playing the early piano through the instruments in the collection at the Royal College of Music Museum when I was a student. As a modern pianist I had tended to specialise in late Romantic and twentieth-century music. When I came across these instruments I was overwhelmed and desperately wanted to play Classical repertoire and pretty well nothing else. I was also inspired by the playing (and teaching) of Melvyn Tan, Stanley Hoogland and Malcolm Bilson, with all of whom I was very fortunate to work. Malcolm's recordings of the Mozart concertos were being made in London then and Melvyn was also recording the Beethoven concertos at pretty well the same time. The fortepiano, played extremely well, was therefore prominent in concert life and was very refreshing. It was not playing of purely historical interest but was vital and central to musical culture in London at that time in the 1980s.

M.R.: I associate performing on the piano with an interpretation filled with great emotions. Is there any place in performing the music of eighteenth century on early piano where/when „a romantic pianist” could be satisfied?

G.G.: I only play early instruments because they allow me to interpretate what I see/hear in the music with emotion. The modern piano is for me rather too sluggish and lacking in emotional agility. I obviously realise that many don't find this to be true, and play the modern piano with directness and passion but I emphasise that I play the fortepiano not because of historical interest, although subsequently this has developed, but rather because I find that it provides the expressive vehicle for me to get what I feel about the music across to audiences.

M.R.: In Poland the early piano society (still small) is a place of meeting for the modern pianists and the harpsichordists. How can profit/react with this fact a two different „sides”? In the UK are there any „original” early piano players?

G.G.: There may be some lucky souls who have always had the opportunity to play on fine eighteenth-century instruments from birth but sadly I suspect they might be few and far between! Most come across it at college. At the Royal College of Music in London, where I teach, all first-year pianists study a little fortepiano and harpsichord and for most this is there first experience on these early instruments. I am sure that there might be some, such as myself, who have mostly learned the Classical/early Romantic repertoire on the fortepiano because their natural predilections on the Steinway was for later music.

M.R.: Last year you gave masterclasses in The Krzysztof Penderecki European Centre for Music in Lusławice. What are your impressions?

G.G.: I was very impressed by how quickly the students were able to adapt to the very different technical and expressive demands of the fortepiano and the general standard of students was extremely high. They were very lucky to have such wonderful instruments to play on too, especially the fabulous Walter and Bertsche copies of Viennese instruments made by Robert Brown.

M.R.: How do you imagine the future of playing the keyboards? Will the musician be rather focused on one period, one instrument, specialising in the one subject perfectly or rather the keyboard player will should have skills to play everything on every instrument?

G.G.: I wish I knew! On one hand there is an overwhelming uniformity in piano construction, with the possible exception of Daniel Barenboim's straight strung Steinway, which I think is a very positive sign. However, I hope that pianists will be encouraged to try a whole range of instruments that might suggest conceptual possibilities in music that might otherwise not occur. This variability was part of the richness of performing life in the eighteenth and nineteenth century and an awareness of this can help in our understanding of the notation and the practice of the music itself. Experience on different pianos can also encourage a performative flexibility that can help both technically and musically. Composers tended to use the full compass of the piano and so playing all music on all pianos is not physically possible but really the main notion of period instrument performance is that the instrument of a particular era can reveal idiosyncrasies and characteristics that might otherwise be lost. They are the native speakers of the language that was written on/for them. They can't tell us everything but not to consult them at all would seem to be an opportunity missed.

Maurycy Raczyński, "... the main notion of period instrument performance is that the instrument of a particular era can reveal idiosyncrasies and characteristics that might otherwise be lost." Interview with Geoffrey Govier