The term ‘interactive art’ cannot be described without mentioning Nam June Paik (1932-2006). Korean American artist is also considered as the pioneer of the video art. In the childhood Paik was trained to become a classical pianist, however due to historical circumstances, Paik moved to Hong Kong and then Japan where he met Arnold Schoenberg. After he finished his thesis on twelve-tone music (1956), he moved to West Germany to continue his studies in musicology PhD programme, although in the same year he switched to study composition in Freiburg Music Academy. Paik’s interests were focused on progressive music technique. He was practising and studying music at the same time.

At this point, Paik attended courses in Darmstadt where he  got in touch with Karlheinz Stockhausen, John Cage and George Maciunas. Inspired by Cage, Paik began to use everyday sounds and noise in his compositions. Inspired by Stockhausen’s electronic music, Paik began to study about musique concrete and the pioneer – Pierre Schaeffer. Influenced by these, without no doubt, composers with different background, idea about music in general and techniques, Paik created a new type of music – interactive art.

In Paik’s first exhibition at Galerie Parnass at Wuppertal in 1963, Paik presented Exposition of Music – Electronic Television, which became a career shift from a composer to performance artist, in addition to this, an artist who used television as an instrument. 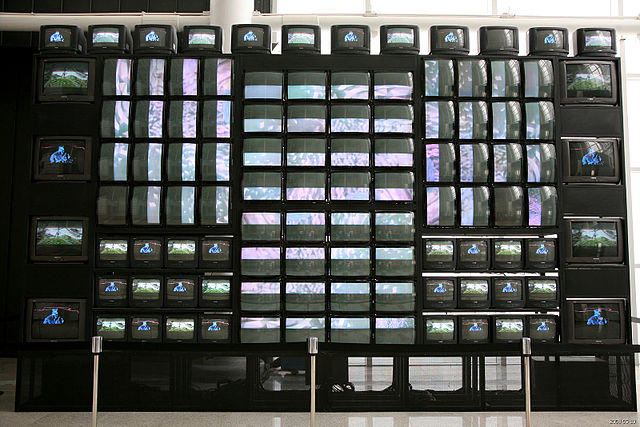 It might be challenging to link Paik’s musical background with interactive art at first glance but it is important to see the whole process from a-music experiments to interactive art in solo exhibition (Exposition of Music – Electronic Television).